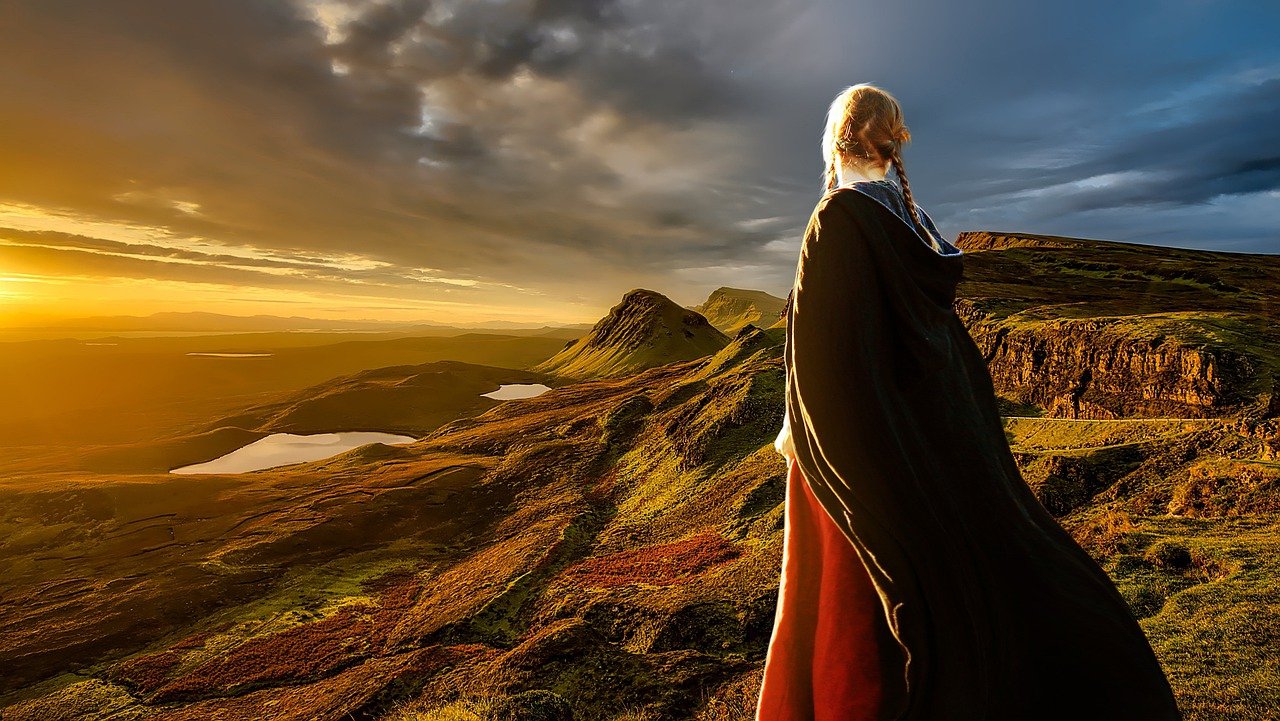 “Looks like the hunting party has returned early. They must have had luck.” Aonghus pointed out the group of men approaching at a gallop in the distance.

Tiernan frowned as he watched the men. “They seem to have found a horse. A fine one by the looks of him.” The group stopped at the edge of the camp and one man pulled something off his horse. Someone, Tiernan corrected himself. A fairly well-equipped knight, judging by the chainmail he wore. Tiernan watched as the small man staggered to his feet, trying to break away from the gathering crowd. The knight was surrounded by several of his men and Tiernan saw the stranger take a swing at one of them. He headed towards the group, determined to stop the turmoil before it got out of hand. As he started down the slope, the sun broke through the clouds and spilled onto the valley below him. At the light from the sun, the stranger’s queued hair was turned the color of fire. A memory tugged at him, but Tiernan ignored it.

As Tiernan’s men saw him approach, they released the knight. The stranger swung around and Tiernan discovered it wasn’t a knight, but a gasping, frantic woman. She tried to escape, ducking around him, but he grabbed her arm. She lashed out, attempting to strike him. He grabbed her with both hands and shook her hard, causing her to stumble and nearly fall.

“Stop this behavior immediately.” He commanded, stilling her. She looked up into his eyes and he swore he saw relief.

“It’s you, I’ve found you. Thank God.” The woman jerked free of his grasp, dropping into an awkward curtsy. “Lord Ross. I am Wallace of Emlyn, Lord Robert Carrson’s cousin and I am here to repay an old debt.”

Tiernan was speechless for a moment. What was a woman, especially this woman doing here? She had changed, but he did recognize her, if nothing else than from her pale green eyes and oddly colored hair. He frowned as she smiled up at him, relief clearly written across her features. Whatever she had to be glad about he was certain he did not want to know.

“Bring her to the meeting tent. I’ll deal with the troublesome brat there.” He turned on his heel and stalked towards his tent, not bothering to see that his orders were obeyed.

Wallace gasped. He dare call her a brat? After she had risked life and limb to find him here in the middle of nowhere? Rage obscurred her vision for a moment and she briefly considered grabbing a rock from the ground and hurling it at his broad back as he stalked away from her. A man took her arm, but she shook him off.

“Don’t dare lay your hands upon me.” She turned to follow Tiernan, but stopped, casting a glance back over her shoulder at the men. “Have my packages brought to the tent and be certain someone tends to my horse; he is well deserving of a good rub.”

Wallace’s anger did not lessen as she struggled up the hill, Tiernan easily outpacing her. Why did he have to walk so fast? A cough bubbled from her chest and she paused, drinking deeply from the water bladder she carried. She would never have expected such rudeness from him. It’s not like she expected Tiernan to welcome her with open arms, but she would have at least thought he would treat her civilly. She brushed her worries aside as he disappeared into the largest tent on the ridge and hurried after him.

By the time she reached the plateau where the camp was arranged, Wallace was panting with exertion and exhausted after climbing the hill wearing the chainmail. She pushed aside the tent flap to find him lounging on stool, looking bored. As if he had sworn enemies visit him everyday, she thought, as she paused to straighten her hair.

“I doubt anything that you would do could help that tangled rat’s nest,” his tone was scathing and his gaze icy.

Wallace ignored him and continued to work on her hair until she had it somewhat under control. It gave her a chance to slow her breathing and calm her raging emotions. She was furious and excited at the same time. She had succeeded in reaching Tiernan and he was alive. If the welcome was less than hospitable she could certainly overlook it, especially after he thanked her for warning him of the danger his men were facing. She turned to him, having a chance to truly study him for the first time, and lost the breath she had been trying to catch.

He had been attractive years ago, but now… Now he was beautiful. He was different, his face more lean and angular. More manly, she decided. His hair was still long, kept tied back and out of the way, and blessed be, his eyes were still the velvety brown she had remembered. Wallace sighed in relief.

“Are you deaf and dumb?” He demanded. “Why did you call your cousin Lord Carrson? I saved Lord Carrson’s life on the battlefield.”

His sharp tone drew her back to her senses. She drew herself up to her full height and answered his question with as much dignity as she could, ignoring the sorrow the question brought. “My uncle died from the wounds he suffered in the battle.”

“You’re reputed to be a great healer. Why didn’t you save him?”

She flushed at the mockery in his voice. “I could not. I was not allowed.”

A man stepped into the tent and whispered something in Tiernan’s ear. “You have my clan emblem, how did you come by it?”

“I took it from a warrior of yours that I tended.”

Tiernan ignored her question. “I see the Carrsons are thieves as well as traitors.”

Wallace paled at his words; he could not know of Robert’s treachery yet. “I am not a thief.” Her chin lifted.

“I don’t believe you.” Tiernan suddenly loomed over her, his face inches away from hers.

Wallace shrank away from him, uncomfortable with his sudden closeness. She realized with a start that the tent was now empty again. She swallowed hastily.

“Don’t you want to know why I’m here?” She hated the tremor in her voice.

“Why?” His walked away and poured some ale from a bladder.

Anger surged through her again, replacing her fear. “You don’t wonder why a woman would risk her life, leaving her home to search for you?”

Wallace looked at the ground, forcing herself to take a deep shuddering breath and then another. This man before her was a stranger, not the Tiernan of her childhood dreams. She took a final deep breath and looked directly into his eyes. Eyes that were cold and hard.

“I am here to repay an old debt. I have information that will save your life and the lives of your men.” She folded her hands and waited for his response. She could not have been less prepared for what it was.

“Did you not hear what I said?”

“I heard.” He continued laughing, pausing only long enough to wipe his eyes. “I just don’t believe you.”

“You have to!” Wallace exclaimed. “There are men on their way here, warriors. They plan to wipe out your clan.”

He chose now to argue semantics? “I don’t care what you are or what you have. Heed my warning or you and your men will be killed!” Her voice rose along with her temper.

“I doubt that and I grow tired of listening to your lies.” He turned towards the door.

“Tiernan, please.” She grabbed his arm, startled at the feel of hard muscle beneath her fingers. “I speak the truth. I have risked everything to come to you. Protect your men and return to your keep where you can defend yourself.”

“Enough.” He shook his arm free, looking immovable as stone.

“Why don’t you believe me?” Wallace heard her voice quiver.

“You’re a Carrson. I’ll never believe a word from your family again. It nearly cost me my life once before.”

“And your bias will end your life and those of your men this time. I left Galverne to seek you out, to warn you of the coming ambush. I thought I would find…” She bit back her words before they could betray her childish dreams. “I will leave now. Please have someone ready my horse.”

“Not hardly. You will no doubt bring a handsome price from your cousin.”

“You would ransom me?” His silence affirmed her question. She struck him with all her might, the sound of the slap echoing in the tent. “You’re more of a coward than my cousin. Where is your mighty Highland Honor? I thought I knew who you were, Tiernan Ross. I was wrong. You are a cold, hard man.” Her voice broke, but she felt a small sense of satisfaction at seeing the imprint of her hand bloom red upon his cheek as he strode to the tent flap.

“Put her in my tent and make sure she does not escape.” He said as he left, leaving her alone.

She’s not interested in love. He’s the perfect fling. Their affair might be more than she bargained for.